The Lady Bears basketball team faces off against rivals Old Bridge in their first game of the season. 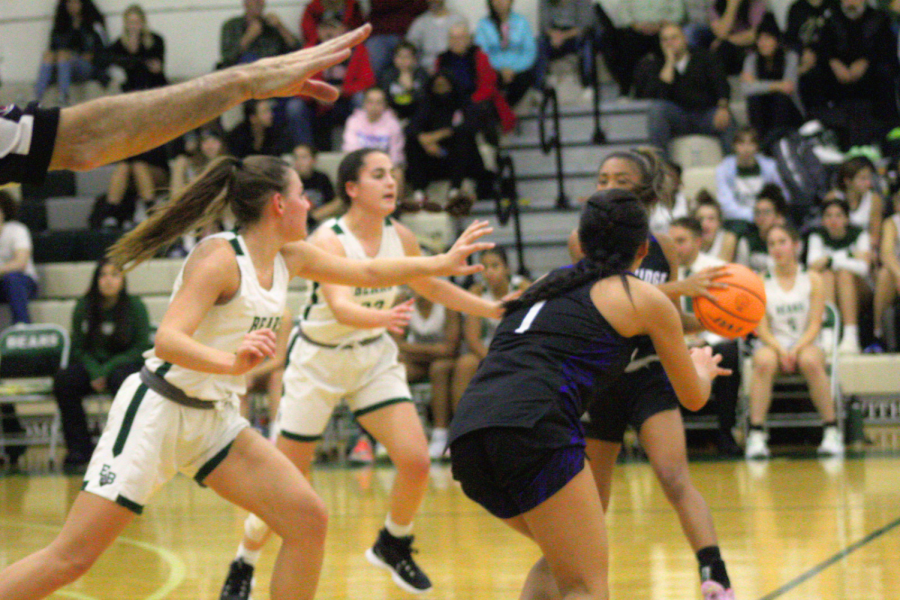 The Bears and the Old Bridge Knights fought ferociously to claim the first win of their seasons this past Thursday, but after a long and tough-fought battle, unfortunately the Knights came out on top.

The Bears came out hungry for a win, taking an early lead of 14-7 at the end of the first quarter. The stands were filled with support from parents, spectators as well as the J.V and Middle school team. With the loud and excited stands, Coach Retz said “the players were able to feed off of that energy.” In the second quarter, the bears were ready to uphold their lead, with Brooke Motusesky securing 6 points and Annie Nezaria securing 7. The Knights trailed 7 points behind at the end. The cheerleaders came out between halves and gave an exciting performance, where they tossed Nicolina Tapia up into the air. Still maintaining hope, the Knights came out hungry in the third quarter, grabbing 14 points, tying the Bears at the end of the quarter 39-39.

With crowds roaring at this tied score, both teams felt the pressure as they headed back onto the court for the final quarter. The tight game made an intense and excited crowd. Coach Retz explained how “the players were able to feed off of that energy” as they fought through this final quarter.

With seconds left, Old Bridge put themselves ahead of the Bears by 4 points, but keeping their heads up, at the last second, Tamea El scored another 3 points, making the score 53-52, Knights ahead. The Bears were not ready to give up quite yet though. Still fighting for a chance to grab their first win of the season, they fought for .2 seconds to be put back on the clock. Despite Old Bridge having possession, Bears kept their heads up and gave one last effort at pulling ahead. Falling short by just one point, Old Bridge was able to take home their first win of the season.

This intense game is just the start to the Lady Bears upcoming season. Coach Retz explains how the team is working towards being “the best team that [they] can be” and to achieve this, they plan to “work hard every day and be better than [they] were yesterday.” Their subsequent win against Piscataway on the 22nd was testament to that. With more games to come, the Bears are ready to come back stronger and better, and don’t worry, this won’t be their last battle with the Knights!