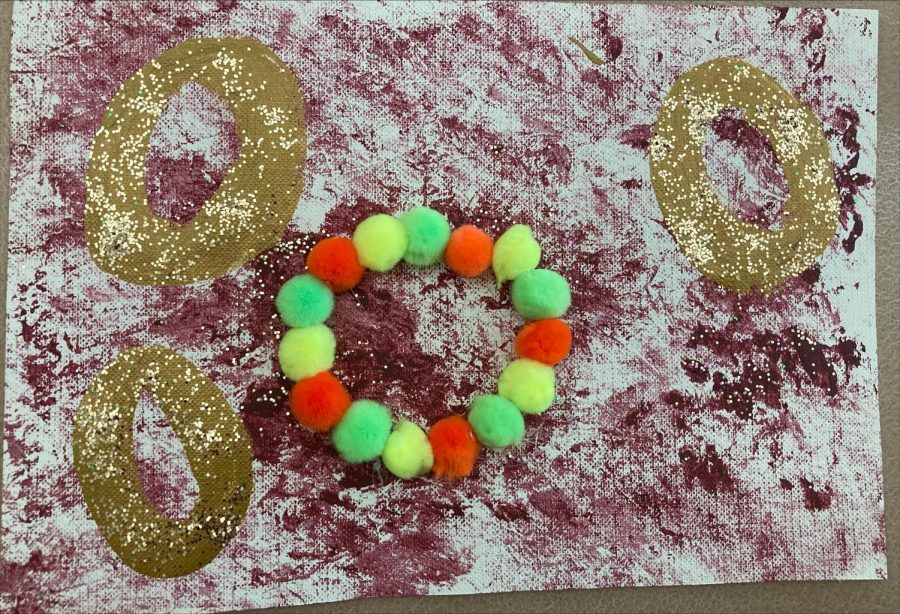 In this painting, I first created a red blotched background to represent the despair and betrayal I was experiencing throughout this dream. Then, of course, I painted the gold bands to represent my so-called friends. In the middle is an example of one of the beaded bracelets (represented by mini pom-poms) I was forced to make in the school/jail.

This fourth dream is another one that takes place at EBHS, but the school functioned simultaneously as a jail and bead factory instead of as a place of education. For an unknown reason, I was in prison, being forced to make beaded bracelets. The security guards at our school were prison guards in this dream. In my cell (which was simply an EBHS classroom), instead of a place to sleep and bars holding me inside, there was a factory line with plastic beads in a variety of colors like orange, green, and yellow, and thin wire coming my way. My job was to use some sort of firing machine to quickly string those beads onto the wire and place the completed bracelets into a bowl. Once the bowl was filled up, a prison guard would come and replace the bowl with a new one and order me to continue making bracelets.
The bracelet making went on for a while until the prison guard watching me got up and announced to me, “I need to go to the bathroom. Don’t you dare move or I will come find you.” Then he exited my cell and went to the bathroom.
Of course, I didn’t listen to the guard and I took this as my chance to try and escape. Somehow, I unlocked the door and ran out. My cell turned out to be in B-hall, so I quickly turned towards the stairs that lead to the main office. I was stopped by a group of three students. Their faces were unfamiliar to me, but I know that they were my friends in the dream. However, they weren’t prisoners like me. They were all wearing thick gold bands on their wrists, indicting that their status at EBHS was somewhere in between prisoner and prison guard.
I pleaded with them: “Please help me get out of here!”

I expected them to immediately say yes and help me escape from the prison. After all, they were my supposed friends and they seemed to be in much better condition than me.
Instead, they shook their heads and circled around me so I had no space to escape from them. The last thing I remember dreaming before waking up is that I was forcibly dragged back to my cell and forced to start making bracelets again.
Some obvious symbols are the prison/prison guard, which can mean feeling trapped or feeling like someone will betray you. I guess that sort of played out in the dream with my friends refusing to help me, but I don’t necessarily see what that has to do with my current relationships. Bracelets in dreams symbolize the need to rekindle old friendships or reach out to people you haven’t talk to in a long time. The contrast in the meanings of bracelets vs. prison guards is an interesting juxtaposition that makes this dream even more confusing to interpret.

This was sort of a morbid and strange dream, which had negative connotations once again- a theme I’m starting to notice as I reflect on these dreams. As I interpret the symbols, I can’t seem to correlate the symbols to my current situations, but that leads me to wonder: could my dreams be prophetic dreams? Could they be symbolizing something to come for me in the future? At the rate these reflections are going, I certainly hope not.
Keep scrolling for the last dream featured in the Dream Scheme- it’s not as morbid as this one, but still a little strange.