The girls bowling team had a wildly successful season this year, coming in second place at the GMC Tournament and first place at North II Group IV sectionals. 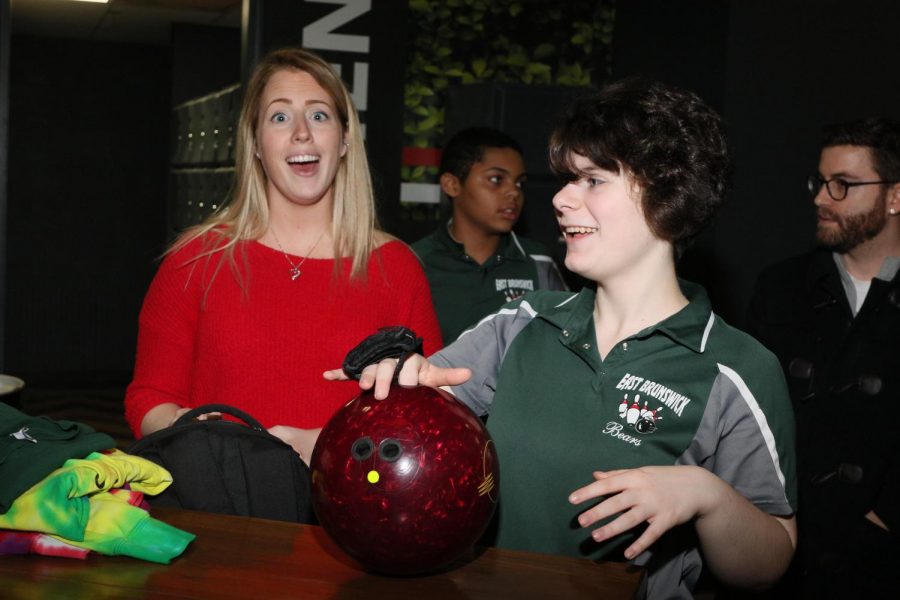 Gallery|8 Photos
Coach Brehm laughs with junior Rebecca Reitano before a match. "The most rewarding part of coaching is watching the girls' success," she says. "That little 'Thanks for helping me Coach Brehm!' does make me happy. Knowing that I was able to help someone to be successful makes me a proud to be a coach."

The girls bowling team has had a tremendously successful season this fall—“one of the best in the past few years,” according to Coach Amy Brehm. Not only did they end with a record score of 16-4, but they placed second in the GMC conference, were the North II Group IV sectional champions, and took third place at the Joe Romer tournament.

“This year, we have a young team, graduating only three seniors, which is small compared to past seasons,” says Coach Brehm. Even so, their talent would make you believe they have experience far beyond their years.

Junior Rebecca Reitano won the GMC individual tournament with the highest average in the county, bowling a 631 in the stepladder semifinal, while sophomore Mackenzie Keane came in sixth with a 592 and senior Catherine Attia in ninth with a 576. They are part of the top 35 girls in the county who advanced to the next round of the GMC championship. At the GMC stepladder finals, Keane also secured the top seed with an impressive six-game total of 1314.

Their individual successes were only part of what made the team so successful. Keane, who last year became the second girl in East Brunswick history to capture the title of GMC champion, says, “We grew so close together and formed a bond with each other that will never be broken. It was always an adventure with the team as we worked so hard to achieve our accomplishments.”

Attia agrees, “We had such a remarkable season… because throughout all the wins and losses, the team kept a united front and stayed positive the whole time.”

The warmth of the team is undoubtedly something that seniors will miss. “From Saturday tournaments to the craziest bus rides, nothing’s stood out to me more than the endless amount of support that this team has shown me,” says senior Peyton Hruska.

“There’s no doubt that I’m going to miss our pre-match huddles, hangouts at Chili’s, and most importantly, being surrounded by some of the kindest and most passionate people I’ve ever come to know. Even when times are tough, joining the team is one decision that I’ll never regret.”