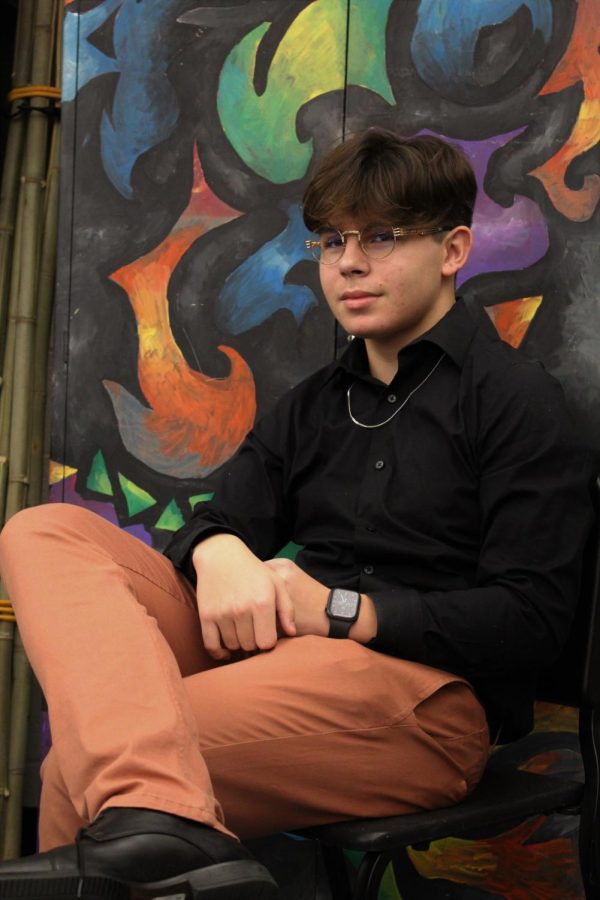 Gallery|3 Photos
Alex Bogomolny, 12, one of tonight's hosts, looks jaw droppingly amazing against the graffiti in the choir room before the show.

It’s an exciting Friday night for the boys of East Brunswick High School; Mr. EBHS. The night for EBHS’ annual male pageant and talent show has finally arrived. Peeking out from the choir room into the auditorium, the boys are astonished by the vast crowd of students filling almost every seat in the room. Even more excited now, the boys hurry along to finish getting ready for their opening acts, and the chatter from the awaiting audience and the cluster of students in the choir room fills the surrounding halls.

It’s five minutes to seven and the lights in the auditorium start to flicker to indicate that the show is about to begin. The boys are introduced and after performing a group dance, they put on a great show. From singing, to lip syncing, performing an original rap, to playing a guitar and singing, doing stand up comedy, dancing along to some of today’s top tracks, and even doing a contemporary dance routine, the boys make the crowd go wild for more. They are very successful in giving the audience a great time, encouraging them to sing along to tunes they all know and love, making them wowed, and filling them with laughter. Senior, Arjun Deepak, a contestant of Mr. EBHS this year shared after the show that “People laughed a lot harder than I thought they would.”

The audience cheers louder than ever, singing “Sweet Caroline” at the top of their lungs. Applauds echo through the auditorium, and the boys return to wow the crowd once again with their beautiful suits, and escorts dressed in elegance. Everyone goes wild as 2019’s Mr. EBHS, Rusty Kelly takes the stage for a surprise performance.
Overall, “I loved that for Mr. EBHS, everybody worked together to create a unique show where people who don’t always perform stepped out of their comfort zone and got on stage. Congratulations to Zach on being crowned the next Mr. EBHS and thank you to everybody who helped to make the show possible!” says Naomi Bravman, 12, who helped organize the show.