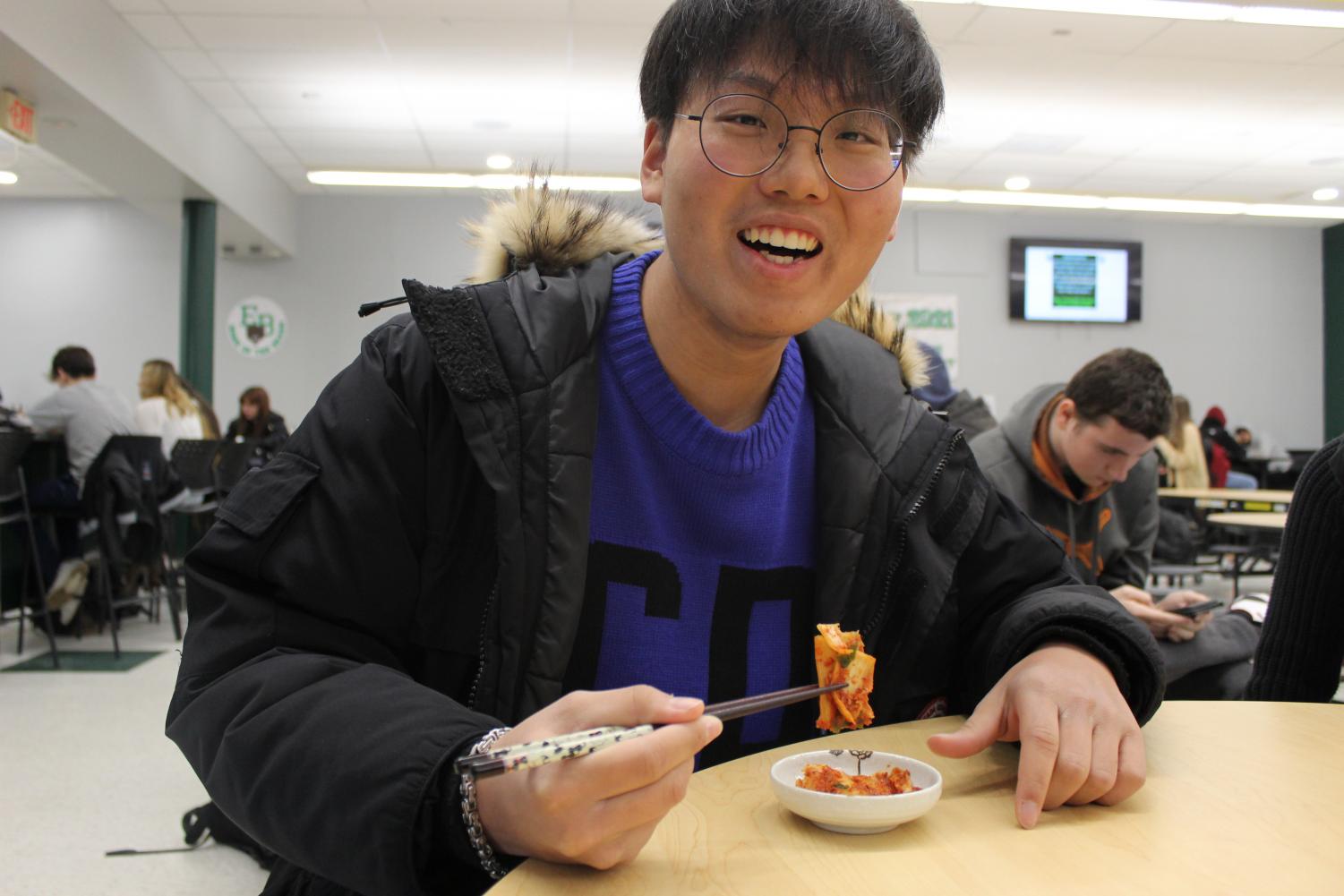 Eric Kim enjoys one of his favorite dishes from South Korea, kimchi.

Seoul Searching: An Interview with Eric Kim on his Immigration to America

7:26 AM classes, challenging courses, standardized tests, college preparation—all of these routines that are now second nature to most of us were once a huge adjustment. Add moving from a new country into the mix, and it seems like an impossible feat. Yet that’s exactly what Eric Kim did when he moved to America from South Korea his freshman year of high school.

Without his parents, Eric Kim flew to the United States to live with his aunt and spend the foreseeable future in a foreign land surrounded by strangers, with some knowledge of English but so much more to learn.

When asked about the move, Eric was surprisingly nonchalant. I was bewildered; I can barely adapt to changing classes every year. How could someone be so cool about uprooting the life they’d known for 14 years? But for Eric, it was more out of necessity, and he took the move in stride.

“Moving to America was one of the biggest decisions I’ve made in my life,” he says. Still, he lightens the mood, joking that one of the reasons for the move was “the pain of fourteen hours of studying” in Korea, where he spent more time in school than at home. “It was like brainwashing,” he laughs.

In America, a 7-hour school day poses different challenges. There was the inevitable culture shock, and for Eric, this came in the form of calculators in math class. “In my home country, we didn’t even think or dream of using a calculator,” he says, but at the high school he was suddenly expected to know every command, even on tests.

His biggest struggle, however, was the language barrier between him and the rest of his peers. “It was difficult for me to express my emotions… I had many difficulties talking to people.”

English class was especially difficult, and although he has tremendously improved in an impressively short amount of time, he still sometimes struggles with communicating. “When I’m sick or tired, it is tough to think and speak in a second language,” he says. “For people like me, Google Translate is our favorite app: translating the whole English lesson to Korean.” Anyone taking a foreign language in school can surely relate to the life-saving capabilities of Google Translate. For Eric, though, English wasn’t a class he got to leave at the end of the period; it was his new life, and as a result, he struggled with homesickness a lot of the time.

I think every person I’ve met from my first day in America to this day were helpful. I’m especially thankful for my Aunt for giving me a chance to live in America.”

“Back when I was a freshman, I strongly wanted to fly back to Korea due to the language barrier and the cultural differences. However, my friends really helped me survive,” he says.

There are inevitably some things he misses. “To this day, I truly miss the foods in Korea and mom-made foods as well… so please feel free to contact me if you know any Korean food places,” he adds with a smile.

Soon though, with the help of friends and family in America, Eric began to feel less homesick. “I think every person I’ve met from my first day in America to this day were helpful. I’m especially thankful for my Aunt for giving me a chance to live in America. If it wasn’t for her, it would have been much more difficult.” he tells me. “I also want to thank [my friend] Winston.”

From our conversation alone, it’s clear that there is plenty of charisma and warmth beneath his deceptively quiet exterior. When asked about the friends that helped him through the adjustment, he even gives me a completely undeserved shoutout for choosing to interview him.

With high school coming to a close, Eric is applying to college just like any other senior, but with one crucial difference: instead of attending college in the Fall of 2020, he will be doing military service in Korea. Although he plans to live in the United States for the rest of his life, it is required that all male Korean citizens serve for two years—“or three if you’re unlucky”—if they want to be able to return to Korea. To Eric, this isn’t a choice. He wants to be able to visit his parents while he attends college in the States in two years.

In line with his cool attitude, Eric doesn’t seem to think that his experiences are particularly worthwhile or transformative. “To be honest, I don’t know if I’m shaped differently from my first day of freshman year, but people have told me that I am a different person from who I was. Well… only the OGs will know the truth.”