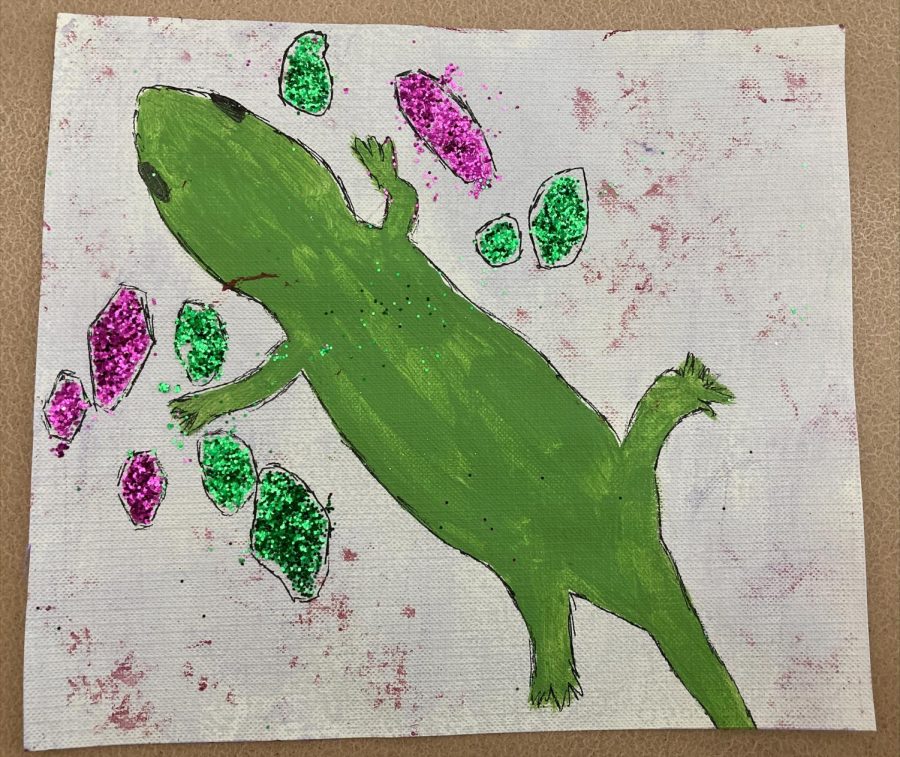 This is again pretty self explanatory; I just painted the lizard that steals my jewels. Like I said earlier, I believe this dream was influenced by the ancient Islamic fantasy book I was reading during the day. I wanted my painting to sort of feel like it could’ve been made by a merchant from that time, so I tried to ‘blur’ the background with paint to ‘age’ the canvas paper. I also loosely outlined my paintings of the lizards and jewels as if someone had quickly sketched them out.

This is a dream where I remembered less of the details of the dream and more of the vibes and what I was feeling. The setting of the dream was sort of like Agrabah, the fictional land in the Disney movie Aladdin. I was some type of secret jewel trader or merchant, wearing a large beige scarf over my head to hide my face. Hidden in the pockets of my very baggy clothing was a satchel full of shining gems. As I was walking across the market that I was hoping to trade in, a huge green lizard crawled onto my foot. I tried to shake it off, but instead it crawled into my robe and nestled itself inside my bag of jewels.

The lizard somehow stuck a few jewels onto its back and ran off. That’s the last thing I can remember, but this is a dream I keep coming back to because of the vibes of it. There was a mystical atmosphere in this dream, kind of like I was in an enchanted kingdom and there was some sort of magical force surrounding me. This was another cinematic dream, and it definitely felt like I was in a movie following a pre-written plot. There was also a distinct color scheme in this dream, which was white, a royal purple, magenta, and emerald green.

This dream may have also been influenced by the fact that I read about 300 pages of The Kingdom of Copper that day, which is the second book in an epic ancient Islamic fantasy trilogy where the setting looks a lot like Agrabah. Because I can barely remember the dream and I can see where most of its elements came from, I don’t really see a point in trying to interpret the symbols.

Keep reading through the next chapter, though- because that one is a little more interesting! Happy dreaming!