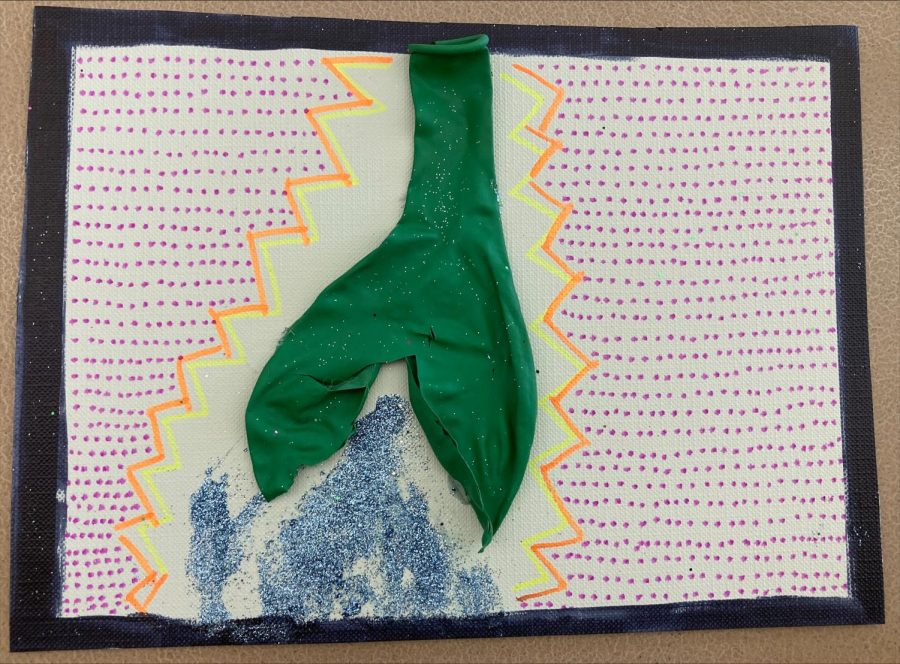 Like I mentioned in my description of the dream, parts of it felt dramatic like I was in a sitcom or some type of TV show. I wasn’t sure how to portray a sitcom through artwork, so instead I tried to show the moment where the water balloon breaks in a comic book style (sort of). I don’t think I was really that successful, but there’s still a cool abstract feeling to it.

The first part of this dream took place in the terminal of the high school. For some reason, the tour that the seniors give to the incoming sophomores at the end of summer was happening in the middle of the school year, and the tour was being given to fellow seniors instead. I don’t remember many specific details about this dream or about who else was in it, but I do remember a strange series of events.
The dream started with me finishing off the tour of the high school and waving goodbye to a group of students. I headed to the parking lot and unlocked my car (which was white instead of black in this dream). When I stepped inside my car, there was already a student inside. They didn’t really have a face (or I just can’t remember it), but I knew they were a senior. They asked me for a ride home, and I remember being confused as to why they would need a ride home when they were also a licensed driver. Just when I was about to give in and say yes to the student, they pulled a bright green water balloon out of their pocket and broke it over my head, indicating that they were participating in senior assassin- which I was not. I tried to look up what certain symbols might mean: for example, a car can represent navigating or traveling into a new phase of life, which makes sense for where I am in my own life. But the color of the car changing from black to white is supposedly supposed to represent a change from evil to good, or from negative to positivity, which I’m not sure has any distinct meaning to me. According to dreammoods.com, “to dream that someone throws water at you implies that you need to show more of your emotions. You have been too disconnected from others. Alternatively, it may mean that you need to cool off.” While this is an interesting meaning, I was actually surprised while reading this description of water because I feel like I’m actually a very open person who shares her feelings a lot. Maybe it was just really hot in my room that night?

This dream was another one of my cinematic dreams, and right before the student dropped the balloon over my head, there was a zoom-in on the balloon, and then another one on my face, like we were in a sitcom. Another thing that was interesting about this dream was that it was a recurring one. There are 8-10 types of dreams, which you can read about here. A recurring dream is one that occurs over and over again with barely any change in storyline. Usually, they are negative and may be repeating because of an unresolved conflict. For me, this was the third time this dream had occurred and as I write this about a week later, I’ve had the same dream two more times. Needless to say, I’m tired of getting ambushed by water balloons.